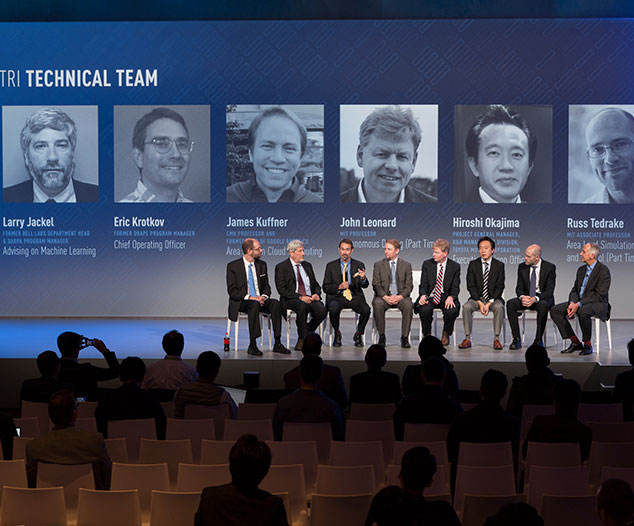 LAS VEGAS - The Toyota Research Institute (TRI) announced the hiring of its technical leadership team on Jan. 5, 2016, bringing together an all-star group of scientists and engineers to help drive research into artificial intelligence and robots. TRI CEO Gill Pratt introduced the technical team and initial TRI research programs in a press conference at the 2016 International Consumer Electronics Show. In addition to the technical team, TRI work will be guided by an Advisory Board of corporate, scientific and public policy leaders from around the world.

First announced in November 2015, TRI is a research and development enterprise designed to bridge the gap between fundamental research and product development. Funded by an initial five-year, $1 billion investment, it has been launched with mandates to enhance the safety of automobiles, with the ultimate goal of creating a car that is incapable of causing a crash; increase access to cars to those who otherwise cannot drive, including the handicapped and the elderly; help translate outdoor mobility technology into products for indoor mobility; and accelerate scientific discovery by applying techniques from artificial intelligence and machine learning.

“While the most important technology for enhancing human mobility has traditionally been hardware, today software and data are increasingly essential,” said Gill Pratt, Toyota Executive Technical Advisor and CEO of TRI. “Our leadership team brings decades of experience in pushing the boundaries of human knowledge in computer science and robotics, but we are only getting started. The scale of Toyota’s commitment reflects our belief in the importance of developing safe and reliable automated mobility systems. Simply put, we believe we can significantly improve the quality of life for all people, regardless of age, with mobility products in all aspects of life.”

Professors Tedrake, Leonard and Storey will work part time with TRI and continue in their university roles. The Advisory Board will be made up of a range of outside experts including:

The hiring announcement comes as TRI is moving quickly to launch its research and development programs. Two new facilities, one in Palo Alto, Calif., and the other in Cambridge, Mass., officially open in January. The two offices are located within ten-minute bike rides and walks to the Stanford and MIT campuses and will further accelerate TRI’s partnership with both universities. Toyota has already committed $50 million over the next five years to support collaborative research into artificial intelligence and robotics research at Stanford and MIT. The program has identified and funded almost thirty initial research projects and project teams.