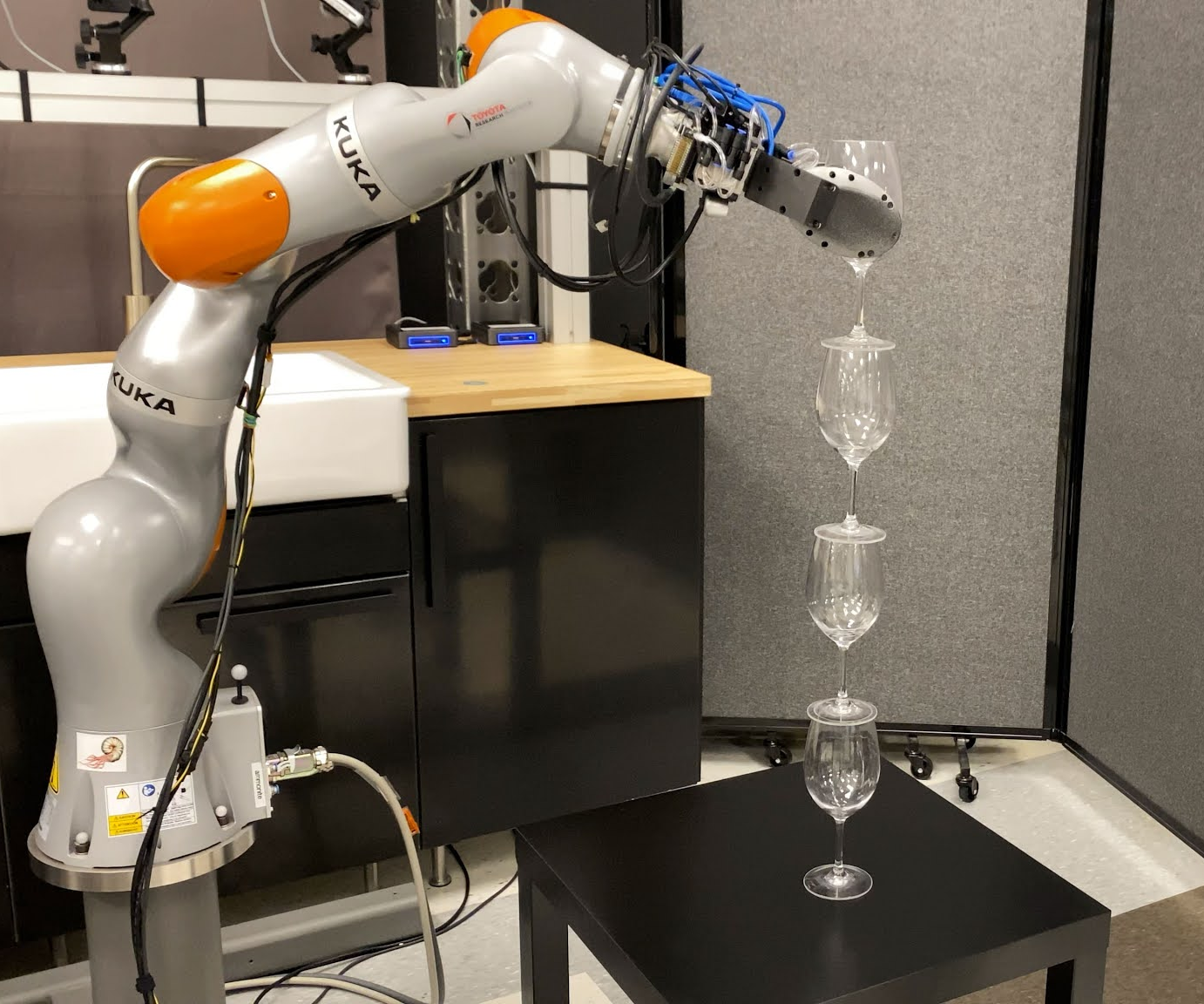 CAMBRIDGE, Mass. - For over half a century, visions of the future have featured robots serving as domestic assistants. But despite many years of development in the robotics field, except for a few elementary tasks like floor vacuuming, the dream of the domestic robot remains unfulfilled.

Toyota Research Institute (TRI) is working to change all that. This has far reaching implications for society beyond the desire to have clean and tidy homes. If we think more broadly, societies around the world are aging and families face difficult choices regarding how to care for elderly relatives.  Robotic assistants have the potential to do far more than clean. They can also assist those with disabilities or age-related challenges so they can age in place with independence, dignity, and joy.

As part of its work to create a domestic robot, TRI is focusing on innovating the machine’s ‘helping hands.’ A domestic robot’s hands (also known as manipulators or grippers) must handle a wide variety of household objects to be useful. These manipulators must be capable of stable grasps, precise placement and safe interactions during inadvertent contact. To be affordable as part of a household robot, the gripper must also be low cost. TRI engineers have designed a manipulator with all these capabilities called the Soft Bubble Gripper.

The Soft Bubble Gripper builds on past achievements by the TRI Manipulation Team. Previously, TRI’s robots gripped objects, sorted them, and even correctly placed items in a dishwasher using conventional, two-fingered grippers guided by external cameras. The grippers relied on these external cameras to do their work. In other words, they had no sense of touch.

Now, TRI has found a way to give these domestic robots a better ability to sense their work with soft grippers that both passively hold objects better and actively sense how much force is applied. Most importantly, the soft grippers accurately measure lateral force - which indicates when an object is about to slip out of a gripper’s grasp.

The gripper’s development team is led by Alex Alspach, who tapped into his soft robot development background to ideate the new gripper design, and Naveen Kuppuswamy, who formulated algorithms to use it. Together with TRI’s Tactile Team, they developed technology that utilizes the robust and compliant nature of air-filled, elastic bubbles for gripping with sensing from cameras on the INSIDE. The cameras show what’s happening from a new perspective inside the grasp, including forces that are usually invisible.

Alspach and Kuppuswamy iterated their design, building on a body of work initiated by other research organizations. Early designs used a robot arm with a single, large, round, soft-bubble on its end effector which then graduated to two arms (a.k.a. “big fingers”) for dexterous, tactile-driven tasks like blindly sorting objects and threading a nut onto a giant bolt.  Now, they use a single arm with two smaller fingers, each using a soft bubble which combines all the advantages of compliant gripping with real-time, real-world tactile sensing. The bubbles feel shapes and forces and recognize the object they are gripping, as well as the forces between the object and the fingers. But none of these advances would move us any closer to making domestic robots a reality if the cost of doing so was prohibitive. So, the team paid careful attention to materials expense and designed the Soft Bubble Gripper with inexpensive materials to eliminate that obstacle.

Here’s What It Can Do

This intriguing combination of force and shape data as visualized by these sensors allows robots equipped with Soft Bubble Grippers to perform a range of seemingly impossible tasks (by hard-gripper standards) that the team at TRI is excited to explore. Thus far, lab-validated capabilities of the Soft Bubble Gripper — as documented in the accompanying video — include:

A long-term goal of the TRI robotics research team is to break the traditional robot controller paradigm and accommodate for an ever-changing environment.

“We aim to build robots that can interact with the world around them comfortably,” says Alspach, drawing on his deep experience in soft robotics. “Softness makes the application of robots more reasonable for homes. Taking it further, we can begin to incorporate lightweight materials, air, smaller electronics and an optimized design to help us reduce weight. It’s the combination of soft and lightweight, along with the ability to sense and react, that contributes to safety.”

Kuppuswamy explains: “It’s actually a really tricky problem. In one sense, it’s extremely hard to build because you are working with frontier materials…. It’s not just classical methods and materials like machining or welding.” Further complicating this is the fact that anything inflatable introduces the factor of continuously dynamic shape-shifting, which destabilizes the usual equations. As Kuppuswamy points out, “Mathematically, soft is hard.”

More depth on the technical progress and discoveries with a soft gripping can be read in their published paper, “Soft Bubble grippers for robust and perceptive manipulation.” The team’s research was also recognized at ICRA 2020, the annual IEEE International Conference on Robotics and Automation, with a 2019 Robotics and Automation Letters Best Paper award for another publication about the soft gripper project.

TRI welcomes other scientists researching robotic manipulation to build on their work by bringing their own insights and discoveries. To inspire this collaboration and further the research on soft bubble grippers, they hosted VisuoTactile 2020, a workshop of thought-leaders in visuotactile technology at the Robotics Science and Systems (RSS) conference.

The new Soft Bubble Gripper builds upon TRI’s manipulation research toward making human-assist robots reliable and robust. The team’s design is a well-engineered take on a concept for robot grippers. The extreme softness from the stretchy material (low stiffness compared to standard soft grippers) makes this an especially great gripper all by itself, even without the sensing capability. It can conform to all sorts of weirdly shaped objects and get a real stable grasp. The gripper brings together strength and smarts to handle objects that require a delicate touch and a steady hand.

By adding sensing capability, the team has made a great gripper even smarter. Through sensing geometry, camera images, and most excitingly shear forces, we can now ‘see’ objects in the robot hands by estimating the pose of objects and sensing forces on the surface. The additional benefit is relatively low cost due to the use of inexpensive cameras on the inside of the bubble gripper for perception

For roboticists and consumers alike, advances like the Soft Bubble Grippers bring the practical use of robots one step closer to reality, while opening the doors to future applications in robotics more broadly.