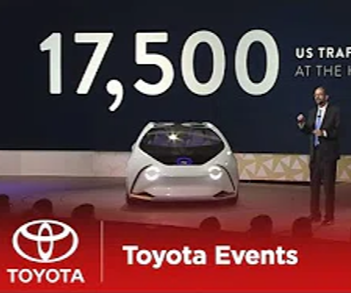 LAS VEGAS - Highlights of Dr. Gill Pratt's remarks during the Toyota press conference at the 2017 CES:

Good afternoon everyone and welcome again to our press conference and the one-year anniversary of the Toyota Research Institute.   TRI’s job is to explore those emerging opportunities,

In the one year of our existence, we have assembled an amazing team.   We have hired more than 100 people, added 50 more people from Toyota Motor Corporation… and plan to hire another one hundred people this year.   TRI’s mission is focused on Artificial Intelligence and includes four goals:

Research is our middle name.   That’s what we do, much of it… but not all of it with Stanford, in Palo Alto, California the University of Michigan, in Ann Arbor and MIT, in Cambridge, Massachusetts, where we recently celebrated the opening of our permanent facility.   Before we go any further, I must remind you that I used to be a professor…and probably always will be.   As a professor I always enjoyed the process of both doing research and giving lectures.   In fact, there will be a short test near the end of my remarks.    My remarks today reflect-on findings from a few key research projects we and our partners have been conducting this past year.   They are framed by a question, designed to offer clarity and provoke discussion on just how complicated this business of autonomous mobility, really is.   The question I’d like to discuss with you today is:  How safe is safe enough?   Society tolerates a lot of human error. We are, after all, “only human.”   But we expect machines to be much better.   Last year, there were about 35,000 fatalities on US highways…involving vehicles controlled by human drivers.   Every single one of those deaths is a tragedy.   What if we could create a fully autonomous car that was “as safe, on average” as a human driver…would that be safe enough?   In other words, would we accept:

Rationally, perhaps the answer should be yes.   But emotionally, we at TRI don’t think it is likely that being “as safe as a human being” will be acceptable.   However, what if the machine was twice as safe as a human-driven car and 17,500 lives were lost in the US every year?   Would we accept such autonomy?   Historically, humans have shown nearly zero-tolerance for injury or death caused by flaws in a machine.   And yet we know that the artificial intelligence systems on which our autonomous cars will depend are presently and unavoidably, imperfect.   “So…How safe is safe enough?”   In the very near future, this question will need an answer.   We don’t yet know for sure.   Nor is it clear how that standard will be devised.   And by whom.   And will it be the same globally?   One standard that is already in place…is the SAE International J3016…revised just last September…that defines five levels of driving automation.   I want to review this standard with you because there continues to be a lot of confusion in the media about it.   All car makers are aiming to achieve level 5, where a car can drive fully autonomously under any traffic or weather condition in any place and at any time.   I need to make this perfectly clear:  This is a wonderful goal.   However, none of us in the automobile…or IT industries are close to achieving true level 5 autonomy.   Collectively, our current prototype autonomous cars can handle many situations.   But there are still many others that are beyond current machine competence.   It will take many years of machine learning and many more miles than anyone has logged of both simulated …and real-world testing to achieve the perfection required for Level 5 autonomy.   But there is good news.   SAE Level 4 autonomy is ALMOST level 5, but with a much shorter timetable for arrival.   Level 4 is fully autonomous except that it only works in a specific Operational Design Domain...like the MCity test facility on the campus of the University of Michigan.   Restrictions could include

In Guardian, the driver is meant to be in control of the car at all times except in those cases where Guardian anticipates or identifies a pending incident and briefly employs a corrective response.   Depending on the situation, Guardian can alert the driver with visual cues and audible alarms, and if necessary influence or control speed and steering.    Like, Yui, our Concept i agent Guardian employs artificial intelligence and becomes smarter and smarter through both first-hand data-gathering experience and by intelligence shared via the cloud.

Over time, we expect Guardian’s growing intelligence will allow it to sense things more clearly and quickly process and anticipate faster… and respond more accurately in a wider array of situations.

Every year cars get safer.   One reason is because every year, automakers equip vehicles with higher and higher levels of active safety.   In ever-increasing numbers, vehicles are already being entrusted…to sense a problem, choose a course of action and respond…assuming, for brief periods, control of the vehicle   And that brings me back to the Concept i.   At TRI, we think that “YUI”…the Concept i agent might not only be a way to engage and provide useful advice.   We think it might also be a way to promote the driver’s continued situational awareness using mild secondary tasks to promote safety.   We’ve only begun our research to find out exactly how that would work.

Perhaps YUI could engage the driver in a conversation, that would reduce the vigilance decrement the way talking on the two-way radio or looking for speed traps seems to do with truck drivers.   We think the agent might even be more effective, because the Yui would be coupled to the autonomy system, which would be constantly monitoring the car’s environment, inside and out merging human and vehicle situational awareness   We’re not sure, but we aim to find out.   Toyota is involved in many aspects of making future cars safer and more accessible.   YUI and Concept-i is a small part of that work.   But it has the potential for being more than a helpful friend.   It may have the potential to become the kind of friend that looks out for you, and keeps you safe.   A guardian, as well as a chauffeur.   Our goal is to someday create a car that will never be responsible for causing a crash, whether it is driven by a human being or by a computer.   And Concept-i may become a key part of that plan.