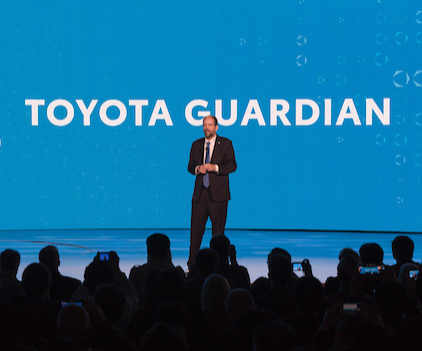 LAS VEGAS - Transcript of Dr. Gill Pratt's remarks during the Toyota press conference at the 2019 CES:

Good afternoon, everyone. Thank you for joining us today and thank you Bob Carter for that perfect lead-in to our rather vivid opening segment. The three-car crash you just saw actually happened just as you saw it.

We know this because we were there. Using an array of sensors and cameras, our engineers at Toyota Research Institute captured a robust and diverse set of data to recreate what happened that day last summer.

Our Lexus test vehicle was traveling in the left-most lane, in manual mode with its autonomy disabled, but its perception capabilities fully active. It was mapping and gathering data at the many tunnels and bridges, in the Bay Area.

Luckily, despite the severity of the crash, no one was injured. We show you this now, not to wow you with technology, but because I want to take you through a question that we posed to ourselves that very day.

Here’s the question: Could a future Toyota Guardian have prevented or mitigated this crash? We believe the answer is yes.

So, what is Toyota Guardian all about?

The essence of Toyota Guardian is about amplifying, rather than replacing human ability, like giving dad his keys back for a bit more time behind the wheel, or even more importantly, saving teenage lives where car crashes account for 30 percent of fatalities.

It’s about correcting for human mistakes and human weaknesses and assisting the most vulnerable people at both ends of the age spectrum where far too many lives are lost. Now, from its beginning, TRI has been committed to a two-track approach to automated driving simultaneously developing Toyota Guardian, while working on Level-4 and Level-5 self-driving systems that we call Toyota Chauffeur.

Chauffeur is the kind of self-driving technology that we hear most about in the press. Specifically, an approach that replaces the human driver with a machine.

Level-5 Chauffeur is defined as a system capable of driving anywhere, anytime, in any conditions, with no driver input. This is a wonderful goal, and someday we may achieve it. But it’s essential to not underestimate how hard a task Chauffeur systems are, both technologically and sociologically.

For example, how do we train a machine about the social ballet required to navigate through an ever-changing environment as well as, or better than, a human driver?

How do we teach these systems to predict what a policeman means when he motions for you to stop at an intersection even though the light is green, or when a pedestrian will try to cross the road?

Let’s also keep in mind that it may take considerable time for society to accept the inevitable crashes, injuries, and fatalities that are still going to occur with Chauffeur systems.

Now, none of us in the automobile or IT industries are close to fully answering these questions.

In the meantime, we have a moral obligation to apply automated vehicle technology to save as many lives possible as soon as possible.

This is why TRI’s primary focus over the last year has been to concentrate most of our effort on Toyota Guardian, employing our unique dual cockpit control system.

With Guardian, the driver is in control of the car at all times except in those cases where Guardian anticipates a pending incident, alerts the driver and decides to employ a corrective response in coordination with driver input.

In this way, Guardian combines and coordinates the skills and strengths of the human and the machine.

In fact, one of the most significant advancements we’ve made to Guardian this year was the creation of blended envelope control of both the human and the machine. We're inspired and informed by the way that modern fighter jets operate where you have a pilot that flies the stick, but actually they don't fly the plane directly.

Instead, the pilot’s intent is translated by a low-level flight control system, to stabilize the aircraft and stay within a safety envelope

So, what does it feel like to have blended envelope control in a car? Most of the time, the driver feels 100 percent in control of the car.

However, as the driver begins to reach the edge of a dynamically changing safety envelope, the machine begins to collaborate with the human driver, nudging the driver back into a safe corridor.

Now, the big idea we really want to drive home is that envelope control is not a discrete on-off switch between the human and the machine.

Rather, it’s a seamless blend of both, human and machine working together as teammates where we extract the best skills from each one.

Guardian will also add this extra measure of oversight to any future autonomous chauffeur system provided by either Toyota, or by some other company.

This is a key capability. Because, as we announced here at CES last year, we plan to include Toyota Guardian as standard equipment on all Toyota e-Palette platforms that we build for the MaaS – Mobility as a Service – market.

By doing so, MaaS companies can use any autonomous Chauffeur system that they choose with Toyota Guardian acting as a redundant check.

What we’re talking about here is the Toyota version of belt-and-suspenders.

We also expect that Guardian, over time, will build much-needed trust and acceptance with the public.

We call it Toyota Guardian.

But we believe in it so much, we would like to see it on every car on the road, not just Toyotas. In other words, Guardian for all.

Now, let me talk a little bit here about how we are building Guardian and how it works.

One of the most important tools in the development of Guardian is simulation. Our software can be tested in either a real car, or a simulated one.

We can go back and forth, seamlessly allowing for continuous integration and testing.

We run code through simulation at an engineer’s desk, emulating how a car will respond on the road.

We can also scale this up and have many instances running in the cloud, simultaneously creating, billions of miles of training data and test data.

But simulation is not enough. Because in order for Guardian to learn and get smarter, it must be subjected to difficult corner cases and demanding scenarios that are simply too dangerous to test on public roads.

And it’s one reason why we just built our own closed course facility at the Michigan Technical Resource Park in Ottawa Lake, not far from our Ann Arbor, Michigan facility.

On closed courses, Guardian’s intelligence and capabilities can be stretched and challenged.

Through continuous refinement Guardian learns how best to navigate and react to dangerous scenarios as they unfold.

For example, in this demonstration you see here a vehicle suddenly pops-out from behind a row of parked cars, too quickly for any car to simply brake in its lane.

Sensing the next lane is clear but for only a brief window, our Guardian alerts the driver, visually and audibly of imminent danger then avoids the pop-out car by maneuvering out of the lane briefly then quickly returning to the original lane to avoid an obstruction ahead.

Now, this growing Guardian capability gives the I-80 incident I opened with today, an interesting lemons-to-lemonade twist. Here was an accidental corner case on a public highway, a dangerous three-car encounter that unfolded right before our eyes.

From the data gathered, we developed an accurate simulation which we then translated into a learning tool for Guardian to perceive, predict and plan the options in a split-second.

We then re-created the scenario on the test track, using real vehicles and a guided, soft-target, dummy-vehicle.

In this instance, Guardian’s best option was to safely accelerate away from encroaching vehicles to avoid collision.

And furthermore, by accelerating out of the way, Guardian also helped make space that might have helped other vehicles from crashing. In this way, a kind of “Altruistic Guardian,” which is a really neat idea.

Next, I would like to address an aspect of Guardian that makes this technology even more compelling. We humans have an inherent desire for freedom of movement.

It’s like when a child first learns to stand-up and giggle its way across a room without the help of mom or dad. Or the smile of accomplishment on the face of a child that rides a bicycle for the first time without training wheels.

I would like you now to imagine driving on a winding road, similar to this challenging cone-lined slalom track. With Guardian off, the driver can easily clip a cone.

With Guardian enabled, you feel in full control, maneuvering the car like an extension of yourself, with Guardian there to coach you, and if necessary to catch you.

No matter what input you give, you never understeer or oversteer,and you never clip a cone. The joy of driving is real. And it’s an inherent and deliberate part of Guardian.

We believe that in the future, Toyota Guardian will not only save lives, but make driving more joyful than ever.

A week from today in Detroit, we will proudly unveil the all-new Supra. Gone but not forgotten for many years, Supra has always been Toyota’s spiritual ode to the joy of driving.

I am sure those of you who are attending the show next week will be wowed!

In closing today, I have a bit of wow to share from TRI, as well. It’s not so much a spiritual ode, like the Supra as it is a new tool in the TRI toolbox.

Today, it is my pleasure to share our newest Guardian and Chauffeur test bed the TRI- P4 research vehicle. Let’s take a look....

Based on the Lexus LS-500h, the P4 is smarter, more agile and more responsive than any of its predecessors. It can process sensor inputs faster and react more quickly to the surrounding environment. The P4 will join the TRI test fleet in the spring of this year further accelerating our development of both Chauffeur and Guardian.

It’s about saving as many lives as we can as soon as we can and making the experience of driving more fun as we make it safer.

It’s about the democratization of safety, a philosophy that we pioneered nearly three years ago when we began providing automatic emergency braking, as standard equipment in nearly every model and trim level we sell in the US.

And it’s about the democratization of excitement where we think even modestly priced cars can be fun to drive and evoke the love of their owners.

We believe that the crash we experienced on Interstate 80 could have been mitigated or avoided altogether with Guardian technology.

As a result of that experience and many others, we are developing Guardian.  And we will build it.  And today we are announcing that we will offer it to the industry.

That’s what “Guardian for all” is all about.

Thank you all for joining us today.