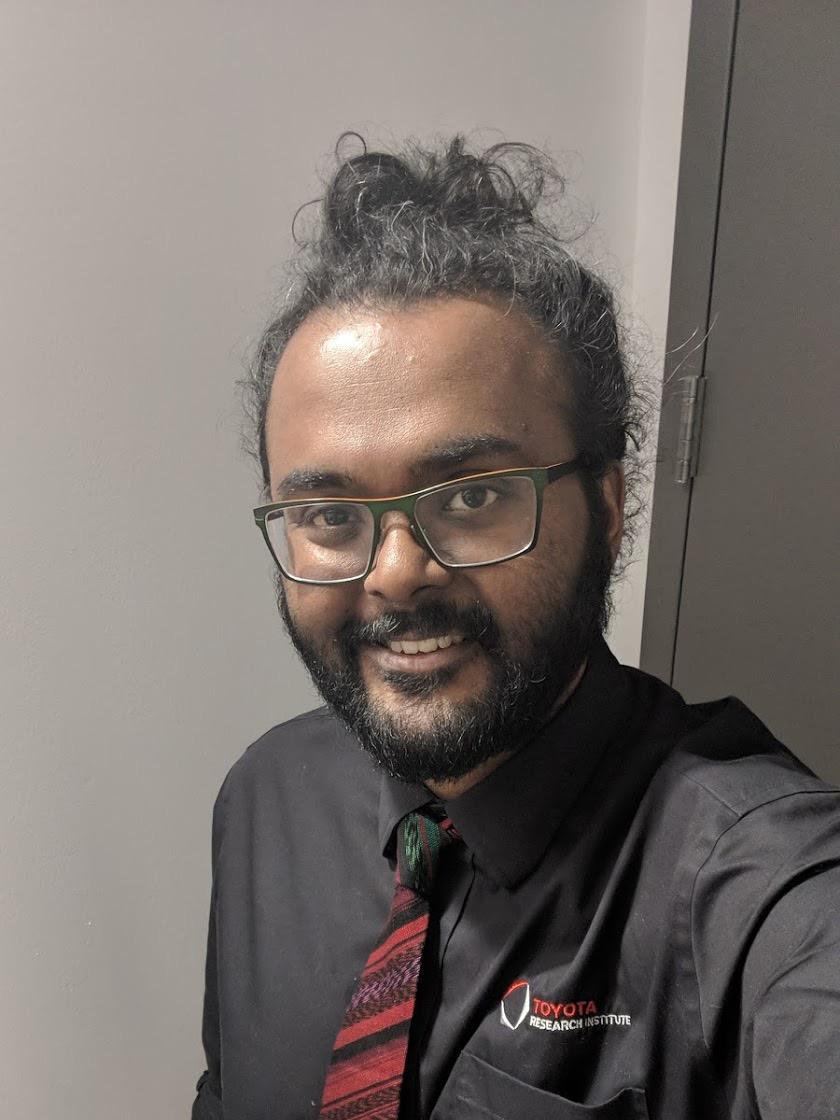 Naveen Kuppuswamy is a Senior Research Scientist and Tactile Perception and Control Lead in the Dextrous Manipulation department. Naveen holds several years of academic and industry experience in working on themes of tactile sensing, soft robotics and robot controls on a wide variety of platforms. He is currently leading a research effort in expanding the scope and robustness of domestic manipulation by exploiting softness and tactile perception within the control - a recent outcome of this effort has been the development of perception and control algorithms and modelling techniques for the TRI "Soft-bubble" sensor and gripper systems.

Dr. Kuppuswamy received a Bachelor of Engineering at Anna University, Chennai, India in 2005, MS in Electrical Engineering at the Korea Advanced Institute for Science and Technology (KAIST), Daejon, South Korea in 2007 and a PhD in Artificial Intelligence at the University of Zurich, Switzerland in 2014 under a Marie Curie Fellowship. Since graduation, he has also spent some time as a Postdoctoral Researcher at the Italian Institute of Technology, Genova, Italy, between 2014 and 2016 and as a Visiting Scientist with the Robotics and Perception Group at the University of Zurich between 2016 and 2017. His research and experience has covered diverse themes in robotics such as cognitive control architectures, modelling and control of wheeled mobile robots, tendon-driven underwater soft robots, tactile perception for humanoids, quadrotor trajectory optimization, educational robots and in human movement modelling and robot-human physical interaction and has authored several publications in leading peer-reviewed journals and conferences. He is also keenly interested in STEM education of under-represented communities around the world. His research has been recognized through awards such as the 2019 Best Paper Award from the IEEE RA-L (Robotics and Automation - Letters) Journal, as a finalist for Best Student Paper at the Robotics Science and Systems Conference in 2017, among others. He is a frequent contributor to the Drake simulation and control library and is actively involved as an editor and reviewer for several of the leading journals and conferences in robotics and frequently gives guest lectures at multiple graduate-level classes at MIT on themes of tactile perception and control. Naveen is deeply passionate about using robots to assist people and improving the quality-of-life of those in need.